On a glorious and sunny spring Saturday, the Sagittarii Holmiae arranged ”shoot at the marks” and ”flight shoot” in the northern Stockholm archipelago, at Runö. We thought it was the first time ever that ”shoot at the marks” had been tried in Sweden. However, we were proven wrong!

The competition of the day consisted of three shoots at distances between 60 and 200 yards (55-180 meters). Three arrows were shot in each shoot, as such:

Archers shoot 3 arrows over a long but unknown distance to land their arrows at the foot of a stake on which is fixed a traditional Mark. The nearer the arrow to the stake, the more accurate the archer is at aiming and ranging the shot. When all have shot, the large scatter of arrows is measured with a tape from the Mark outwards in a circle. The tape is coloured in 3 different segments, the inner segment gives the highest score. The scored arrows are collected, put in 3 different groups and then entered on the score sheets.

Points were given as such:

The results of the Sagittarii Holmiae Spring Shoot ”at the marks” 2015 were: 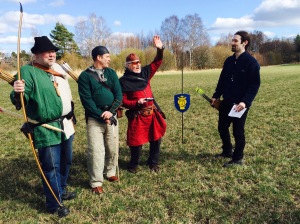 Picture, from left to right: Roland Bexander, Anders Hedlund, Bo Lindberg and the captain of the Sagittarii Holmiae, Adam Westlund.

We also conducted a ”flight shoot”, where archers compete with four arrows each, to shoot as far as possible.

The results of the Sagittarii Holmiae Spring Shoot ”flight” 2015 were:

Congratulations to the winners!

We also tried out our new target material, for some ordinary flat-trajectory shooting. Last and not least, we enjoyed having picnic in the sun.

A huge thank you to Reband Raza and Movitz, who made sure that the security was top-notch, as well as Tomas Tjernberg, who made our beautiful mark with Saint Erik (the patron Saint of Stockholm).

Also a huge and warm thank you to Runö Möten & Events, who let us use their excellent grounds for our shoots. We appreciate it dearly. And we sure hope we are welcome back, during the summer months ahead!

”Keep your arrows straight and may your aim be true!”